My 87 year old father asked me to write some country and Americana songs for him that he could listen to before he moved on to Heaven. How could I say no?

Daddy always liked a “good ol’ Gotcha song”, so I wrote I’m Gonna Kiss & Sing. The Russian Cowgirl is based on a woman my Mama pointed out at the race track one day (my parents were horsemen).  Mama called her Ms. Moscow.  Mama said, “…with her boomiddy boomidy boom, Ms. Moscow gets ‘em young and teaches ‘em how to giddy up.” 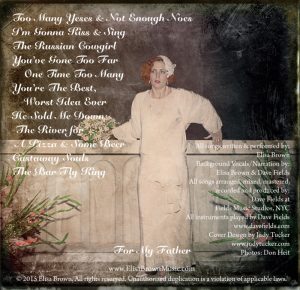 Daddy loves sad songs and waltzes, so I wrote You’ve Gone Too Far One Time Too Many and Castaway Souls…two heartfelt tunes to which Daddy and Mama can dance slowly, cheek to cheek. Another thing that Daddy loves is going to church…every day. So I wrote a jazzy little tune about Temptation that I thought he’d really appreciate called You’re The Best, Worst Idea Ever.

The inspiration for He Sold Me Down The River for A Pizza & Some Beer came to me when I was reminiscing about the time my old car broke down and I called for roadside assistance. I found out that my plan did not include long distance towing; my other half at the time did not purchase me the premium plan because it was $50 more expensive. Now, what can you get nowadays for $50: A Pizza & Some Beer?  Hence, the title.

My Daddy’s Grandmother Pearl expressed herself in such colorful ways that we would hang on every word so as not to miss one of Pearl’s pearls of wisdom. She was always at the ready to tell us a story or sing us a song — as long as we helped out, too.  The Bar Fly King is my homage to these treasured memories.